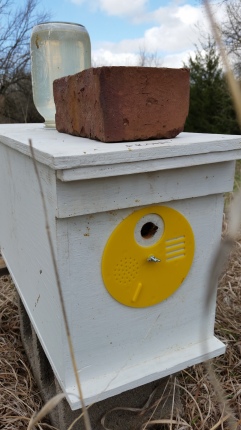 Well, once again… I wish I had better photos, but I run solo and recording with a cell phone with sticky fingers and angry bees is usually a bad combination.  Anyway, here is a nuc that contains the first split of the 2015 season as I try to grow my apiary.  I am recovering from the loss of my strongest hive earlier this spring and trying to expand to at least 5 hives this season.  The weather has been a bit tricky so far.  The early spring season still saw temps dipping too low in the evenings for splits.

I went ahead with this one, even though I was not too thrilled with the timing of the weather and the brood cycle.  Once the weather was nice enough, the bees were toward the end of a big hatch.  I had tons of capped brood but not many eggs and larva.  I did see a few good candidates so I pulled three frames from one of my existing hives that was in good shape.  From it I took three frames.  Two had capped brood, a few eggs and a few larva.  I also took an additional frame of honey and pollen.  I transferred the frames to the nuc box above with all of the bees remaining on their original frames.  I shook an additional frame or two just to make sure I had enough nurse bees to take care of the developing brood.  After 3 days, I took a peek at the nuc because they had consumed a full quart of 1:1 syrup within 24 hours.  They had already begun a few queen cells.  I hope that at least one ends up being viable.  I fed once more on day 3, but I will probably cease feeding as it seemed to induce robbing almost instantly due to the other hives within the same proximity.  If they continue to need fed, I will need to bring the nuc back to my home away from the bee yard so I can feed it well and keep a close eye on the queen build.